A walk on the wild side. Safari guide training in South Africa – part 1: Makuleke.

"Nothing but breathing the air of Africa, and actually walking through it, can communicate the indescribable sensations." William Burchall

In November 2018, I went on a wildlife short course with EcoTraining to learn about Africa’s wildlife and get a glimpse into the education of a safari guide (read more about it here). Little have I known that this one week in the bush would have such a lasting impression on me that I would decide to come back 1.5 years later to enroll in a career course and become an accredited safari guide myself.

And there I was. Back in Makuleke for the first week of my 55-day field guide training. I couldn’t have been more excited to finally be back at one of my most favorite places in Africa!

Makuleke lies in the northern section of Kruger National Park, close to the borders of Zimbabwe and Mozambique. The concession belongs to the Makuleke tribe and only tourists, who stay at one of the few lodges are allowed access to this remote area of the Kruger Park. It makes Makuleke one of the most wild and untouched places in South Africa!

The EcoTraining camp is located close to the rivers Luvuvhu and Limpopo and is surrounded by ancient baobabs, majestic nyala berries and mystical fever tree forests. As soon as we arrived I was once again struck by the sheer beauty of the landscape. This time of the year the rivers were full of water and all trees and bushes were green, lush and bursting with life.

From the 55 days of our Field Guide Course, we would spend seven days in Makuleke before moving on to Karongwe and later on to Mashatu in Botswana. In order to get exposed to different ecosystems and learn as much as possible about the various habitats, EcoTraining students spend time in different camps. Since we only had one week in Makuleke, I planned to enjoy every single minute of it.

Our group consisted of 19 people from different countries, backgrounds and ages. But what we all had in common was the same love and passion for the African bush and its wildlife. To be surrounded by like-minded people, sharing with them the most amazing wildlife encounters was an unforgettable, once in a lifetime experience that would bond us long after the end of our course.

How it all begins

On the starting day of our training course, we were picked up at the Emerald Guest House in Johannesburg. After a long journey of roughly seven hours from Johannesburg to Makuleke, we arrived in camp and quickly set in.

Right on the next day our instructors briefed us on the course outline, and we received the learning material for the next 55 days.  And it was at this moment that I realized I had completely underestimated the amount of work it would take to become a safari guide: several books to read, a workbook to fill out, theory reviews after each lecture, field observations and various practical assignments to test our knowledge. And that was just the regular schedule! At the end of the course we would be tested in various theoretical exams before finally having to prove our guiding skills in a 2-3-hour practical drive. This was definitely not a stroll in the park! But we still had 54 days to go and so I told myself to keep positive and believe that by the end of the course, we would somehow manage to pass…

Each day of the course roughly followed the same structure. However, the things we would see, experience and learn each day were completely depended on the wild encounters we would have on our activities. Thus, every morning brought a new, exciting adventure. And every morning we couldn’t wait to get out there, armed and equipped with our most important companions: a notebook, a pen and binoculars.

a typical day in the bush

We woke up at 5 am every morning when it was still dark outside. After a quick bush breakfast consisting of instant coffee and rusts (traditional african biscuits), we headed out for the first activity of the day, either a bush walk our drive of roughly 3.5 hours. Despite waking up so early, this was by far my most favorite part of the day: the first light making its way through the dense vegetation, the air still cool before the heat of the day would set in, the muted sounds of the bush since all its inhabitants were still a bit sleepy.

During our walks and drives our instructors pointed out and explained what we could hear or see in front of us: a hollowed out dung ball, the torn off bark of a baobab tree, the call of a red-billed oxpecker or the fresh track of a hyena that had passed by during the night. Every little detail was relevant since it conveyed important information about what was happening around us. And right from the beginning we understood one very important lesson: The bush is bursting with life and there is so much more to see and encounter than the big mammals every safari guest hopes to see on a safari. Every individul, from the tiniest decomposer to the biggest carnivore, plays a vital role in the functioning of an ecosystem and everything is connected with each other. Our task during our field guide training was to find, understand and interpret these important connections. Which meant: we not only trained to become guides, but also a true detectives 😉

After exploring the bush on our morning activity we arrived back in camp just in time for breakfast. Luckily, we didn’t have to cook ourselves but had an amazing team of chefs who made sure we had enough to eat. And I was shocked by how much more I could eat in the bush compared to my life back at home. But on the other hand this was not surprising at all! Our brains were constantly working and processing. The 30 birds we had to recognize by call or the various trees we had to be able distiguish were only a tiny fraction of what we had to get into our heads. But exactly these two turned out to be my biggest challenges…

Every day breakfast was followed by a lecture. And every day we covered a different section of the book: geology, astronomy, animal behaviour, ecology, weather, reptiles and much more. The lecture lasted for roughly and hour, and afterwards, we had time to fill out our workbook and prepare for the theory review the next day.

After lunch we headed out for the second acitivy of the day, which again was either a bush walk or drive, depending on the group’s schedule. Each afternoon drive ended with a sundowner at a spectacular spot of the park, before we headed back to camp. On the way back, one student could practice his or her spotlight skills on the seat in front of the landrover while searching for nocturnal animals.

Back in camp it was time for dinner, which, like all meals, was eaten outside. After eating and clearing the tables, the quiet part of the evening began. Everyone who was not too tired from the day’s activities gathered around the campfire. Thinking back of my time in Africa, this is one of my most dearest memories: all of us sitting around the crackling fire and a star-filled sky above us, exchanging stories of the day’s adventures while listening to guitar music and the wild sounds of the bush nearby. In my view, there is not much that can compare to this!

At the end of each day I fell into bed exhausted, but unbelievably happy and overwhelmed by the amazing things I had seen and learned during a single day.

Soon our first week in Makuleke was over. And so too was the luxury of just observing. While the daily activities in Makuleke were still led by our instructors and our only job was to watch and learn, we soon would start the next chapter in our training to become safari guides. And this would mean: driving a 4×4 while conducting a safari and entertaining our guests. Nothing simpler than that….;)

Sad to leave Makuleke and at the same time full of excitement for the challenges ahead, we said goodbye to our instructors and set off to our next adventure: Karongwe. 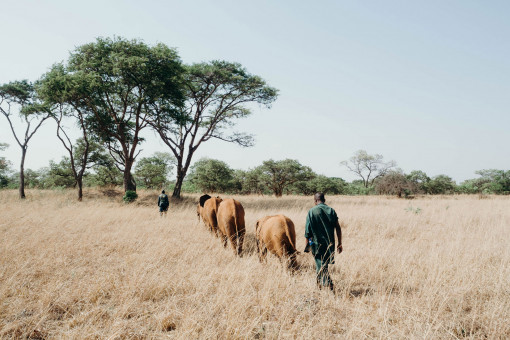 We are all rangers. Volunteering with elephant orphans in Zambia.

To walk in the wake of elephants, to be small in a world of giants, to learn the spoor of silence, and the deep rumbling eloquence of kin. Ian McCallum

END_OF_DOCUMENT_TOKEN_TO_BE_REPLACED 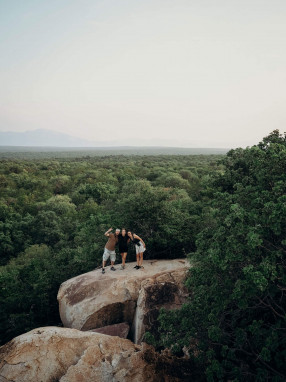 A walk on the wild side. Safari guide training in South Africa – part 2: Karongwe.

“It is time to cut the traces loose, and let your heart go free, beyond that far horizon where your spirit yearns to be. Africa is waiting – come!” Author unknown