A walk on the wild side. Safari guide training in South Africa – part 2: Karongwe.

"It is time to cut the traces loose, and let your heart go free, beyond that far horizon where your spirit yearns to be. Africa is waiting - come!" Author unknown

After a first exciting week in Makuleke and a 7 hour drive that took us from the most northern tip of Kruger National Park to the Greater Kruger Area, we finally arrived at Karongwe Game Reserve. Here we would spend the next three weeks of our Safari Guide Training before eventually moving on to our last camp in Botswana.

Karongwe is a private game reserve of 9.000 ha that shares an open border with the Kruger National Park on its west side. All of the big five animals can be seen here, a fact that nourished our hopes for some thrilling bush encounters! And we were not disappointed…

Compared to Makuleke, the campground in Karongwe was much bigger with a lot of areas to study, relax and socialise. The main area with the dining table and the fire pit was located underneath a beautiful large Jacklberry tree. As with all EcoTraining facilities, Karongwe was not fenced, and so we frequently welcomed a diverse mix of furry neighbors to our campsite: a Nyala family that visited daily and was virtually part of the inventory, buffalos bathing in the close-by river, an elephant strolling through the main area – just to name a few. This truly was living the wild life! But of course, this also meant that we had to keep an eye wide open in the dark, when we made our way back to the tent. 😉

With the arrival in Karongwe it quickly became clear that the real training part of our education had now begun. In the first days, we mainly focused on learning how to drive a 4×4 on the sandy and bumpy roads of the reserve.

Step by step, further elements were added to the practical training, such as learning how to approach an animal, operate the radio or conduct a guest briefing. And finally we started to carry out a complete safari on our own. With every drive or walk, a different student took the lead, while the other students acted as safari guests. But this was easier said than done, since acting as the safari guide meant doing a lot of things simultaneously. From driving in challenging terrain to looking for tracks and animals, from entertaining the guests to interpreting what we could see, hear or smell in front of us. But with every day out in the bush our knowledge grew, and bit-by-bit, we became more comfortable in our role as safari guide.

Aside from learning how to conduct a safari, further practical assignments and field observations were added to our daily schedule. From then on, our instructors regularly assessed us on various practical tasks in which we had to prove that we could not only recite theoretical knowledge, but put this knowledge into practice as well. This included demonstrating that we were able to change a tyre, point out star constellations, identify trees or operate a spotlight during a night drive. However, the most exciting part of our practical assignments were the so called „field observations“. For these assignments, our instructors picked various objects that could be found around camp – such as trees, nests, scat or tracks – and labelled them with numbers. Equipped with pen and paper, every student then had to walk along this labelled path and identify the objects in front of him. This was by far my favorite test since it felt a bit like being a detective at a crime investigation!

Every day in Karongwe brought a new adventure. But one of my most memorable experiences during our time here was the sleep-out in the bush. Late in the afternoon, our group took off to spend the night out in the open, equipped with only a sleeping bag and a mat. As soon as the sun set, we lit a campfire and enjoyed the most amazing starry sky. Looking up to the milky way and listening to the eerie sounds of the bush not only made me feel incredibly humble, but deeply grateful for this incomparable experience.

During the night we took shifts to guard the fire and to keep an eye out for animals that might approach our sleeping site. And suddenly it happened: in the middle of the night we woke up by a strange sound just a few meters away from us. A noise that sounded like an old saw cutting through dense wood. At first, I had no clue what it was. But soon it became clear that the strange sound came from a leopard that was circling our sleeping site and roaring loudly. Most likely, the leopard was on the hunt in his territory and couldn’t quite make out what this strange group of intruders was doing on its home turf. After making his way around our sleeping site and checking us out from every angle, he finally decided to move on. Obviously we didn’t pose a threat to him, and so he continued his journey through the dense vegetation. In the morning we found his tracks in the sandy ground next to our sleeping site, a wonderful reminder of the exciting and unforgettable mid-night ecounter.

While the time in Karongwe slowly passed, some disturbing news made its way to us into the bush. The coronavirus, which we had first heard of shortly before leaving for our training course in Africa, was on the move, and an increasing number of people got infected. In consequence, the border between South Africa and Botswana was closed with immediate effect. This meant that we could no longer complete our course in Botswana as initially planned, but had to move back to our first camp in Makuleke. While everyone was quite sad about not being able to finish the course in Botswana, we quickly adjusted to the new situation and tried to make the best out of it. After all, compared to the situation in Europe, we still felt very safe tucked away in the wilderness of the African bush.

However, only a few days later we received the shocking news that South Africa would go into a strict lock-down, which amongst other things meant the closure of all national parks and the country’s international borders. Within 3o minutes we had to pack our belongings and leave Kruger National Park. Without time to process what was happening around us, we immediately started the search for a flight home, before the airport would close down for an indefinite period of time by the end of the next day. After anxious and exhausting hours of searching for a flight and thanks to the support of family and friends, we finally managed to book the very last plane that left South Africa’s soil before the country went into a monthlong shut-down.

Thinking about the abrupt and overhasty ending of our time in Africa still makes me feel incredibly sad. It was just not the right ending for this once-in-a-lifetime experience. And I know it won’t be. Even as I was still on the plane, I promised myself to come back to South Africa as soon as this awful virus would allow me to complete my training and finally become a safari guide. 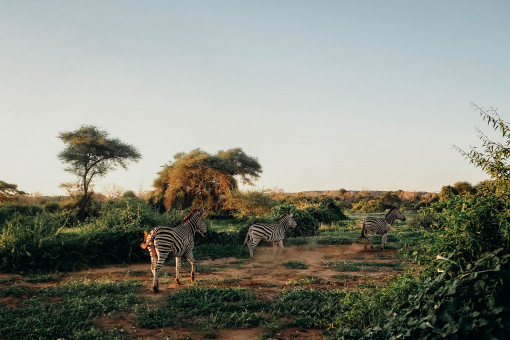 A walk on the wild side. Safari guide training in South Africa – part 1: Makuleke.

„Nothing but breathing the air of Africa, and actually walking through it, can communicate the indescribable sensations.“ William Burchall

END_OF_DOCUMENT_TOKEN_TO_BE_REPLACED 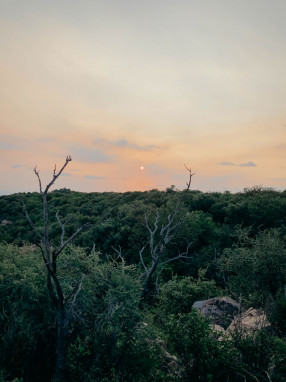